Lorena San Elias stood alone in the Ames Middle School parking lot. It was after 8:30 p.m. and she couldn’t believe she’d got herself into this situation. She had boarded a CyRide bus near Alpha Copies in west Ames, where she had been printing out images for her design portfolio — the one she had spent the last three days working on, pulling all-nighters to finish before the submission deadline. It was the culmination of her first year in the College of Design — and what it felt like her whole future at Iowa State University rested upon.

The next thing she knew, the driver was waking her up, telling her this was the last stop and she had to get off. Now she was lost, and her portfolio was due tomorrow.

San Elias is in the first cohort of students admitted to Iowa State through the ISU 4U Promise program, a partnership between the university and two Des Moines elementary schools with the goal of making higher education more affordable and accessible for those who otherwise may not get the opportunity. To be eligible for the ISU 4U Promise, students must complete fifth grade at King or Moulton Elementaries in 2014 or later, remain enrolled in Des Moines Public Schools for sixth through 12th grades and graduate from high school, then apply to and be accepted through Iowa State’s regular admission process.

San Elias is the first applicant to the College of Design.

“Coming in [as a freshman], integrated studio arts was the only thing I wanted to do,” San Elias said. “Art allows me to express myself and tell stories that I can’t really put into words. For me, it’s about showing the story, especially connecting my Latino heritage to my American culture. It’s really hard to explain in words how that works, but using art as a way to fuse those ideas together creates that unity.”

When the ISU 4U Promise program was first announced in 2013, San Elias was already in middle school and was initially told she wasn’t eligible. Though she did well academically and wanted to attend college, she didn’t believe it would be an option for her financially and didn’t receive much encouragement outside of her parents and siblings. During her senior year of high school, however, her counselor explained that she could receive full tuition assistance through the program to attend Iowa State. (Because Moulton had been a K-8 school when San Elias attended, her class was grandfathered in.)

“Hearing that I actually did get the promise, that I’m actually going to Iowa State was like, wait, what? I need to process this!” she said.

“I’m thinking, I have no [cell] service. I have no Wi-Fi. No one knows where I’m at. I’m by myself and the portfolio is due the next day. I’m not gonna get it done. What am I gonna do? First of all, how am I even gonna get back to campus?”

While deciding what her options were, her answer arrived — another bus. San Elias would be able to submit her portfolio after all.

Her first year at Iowa State was a very transitional time for San Elias. She first participated in the university’s Academic Program for Excellence (APEX) in the summer, which helped her learn about resources on campus, connect with staff and peers and prepare for the more intensive college coursework.

“You realize it’s different from high school – there are no retakes, and you’re responsible for yourself. It was a whole new experience for me, taking classes and being away from home on my own. APEX helped teach us time management and let us know there was a network to support us,” she said.

Even so, San Elias said, she lacked confidence in her abilities, and missed the security of being surrounded by her family. She often reached out to the College of Design’s multicultural liaison officer at the time, Audrey Kennis, who encouraged her to keep going, work through the homesickness and feel more comfortable seeking help from peers.

“I was so used to someone always looking out for me. I didn’t know how to take care of myself,” San Elias said. Despite the stress of a more demanding academic environment and learning how to be on her own, San Elias said she wouldn’t have changed anything about her freshman year, because she learned valuable lessons she needed in order to grow and succeed.

“Learning to say, ‘this is where I’m at now, this is where I want to be, this is what’s holding me back’ and deciding how to overcome those things was what really changed me,” she said.

San Elias discovered she had a home at Iowa State and began reconnecting with childhood friends from Des Moines through the ISU 4U Promise Learning Community. The learning community became another family for her.

Through ISU 4U Promise, she also volunteered in the third-grade classrooms at Moulton, which allowed her to give back to her community. “I see these young girls and I can put myself in their shoes and know their struggles, and I can help inspire them to pursue their education, too,” San Elias said. “That feels really, really good.”

She was also involved in the College of Design’s Building Up In Leadership and Design (BUILD) learning community, where she was able to enhance her study skills and work with a peer mentor in her intended major. “Getting to know them helped me see this is definitely what I want to do.”

With her design portfolio submitted, San Elias completed her first year of college. When June arrived — time for notifications of acceptance into degree programs — she was nervous. Despite being able to apply to all of the design degree programs, she had only applied to integrated studio arts, because it was the only major she really wanted to pursue.

The email came when she was at work. She didn’t want to open it. After staring at the subject line for five minutes while her coworkers urged her to find out what it said, she clicked on the message.

She was accepted into the integrated studio arts (ISA) program.

San Elias rushed to tell her family and found them oddly calm. “‘Oh, we knew you were gonna get in,’ they said. They weren’t freaking out or anything. But there’s that feeling you just know they’re proud.” And she allowed herself to feel proud, too.

This semester, San Elias has focused on further building her skills and exploring the different media areas of the ISA program. Already, she said, she is more confident in presenting her work and sharing her ideas with classmates and faculty.

Her younger sister, Giselle, 15, also attended Moulton and is participating in the ISU 4U Promise program after seeing the success her sibling has been able to achieve. San Elias is glad she can be a role model to her sister and other younger students in her community, and that’s what motivates her most.

“Growing up, for me, I didn’t really have that person that I could look up to and say ‘they’re in college, I can do that, too.’ Now it’s like, the plan is to go to college, and there’s people who can help you get there if you put in the work,” she said. “It’s such a huge relief knowing I’m able to do this. That I don’t have to worry about how I’m gonna pay for it — instead I can focus on learning and what I can do to get better.” 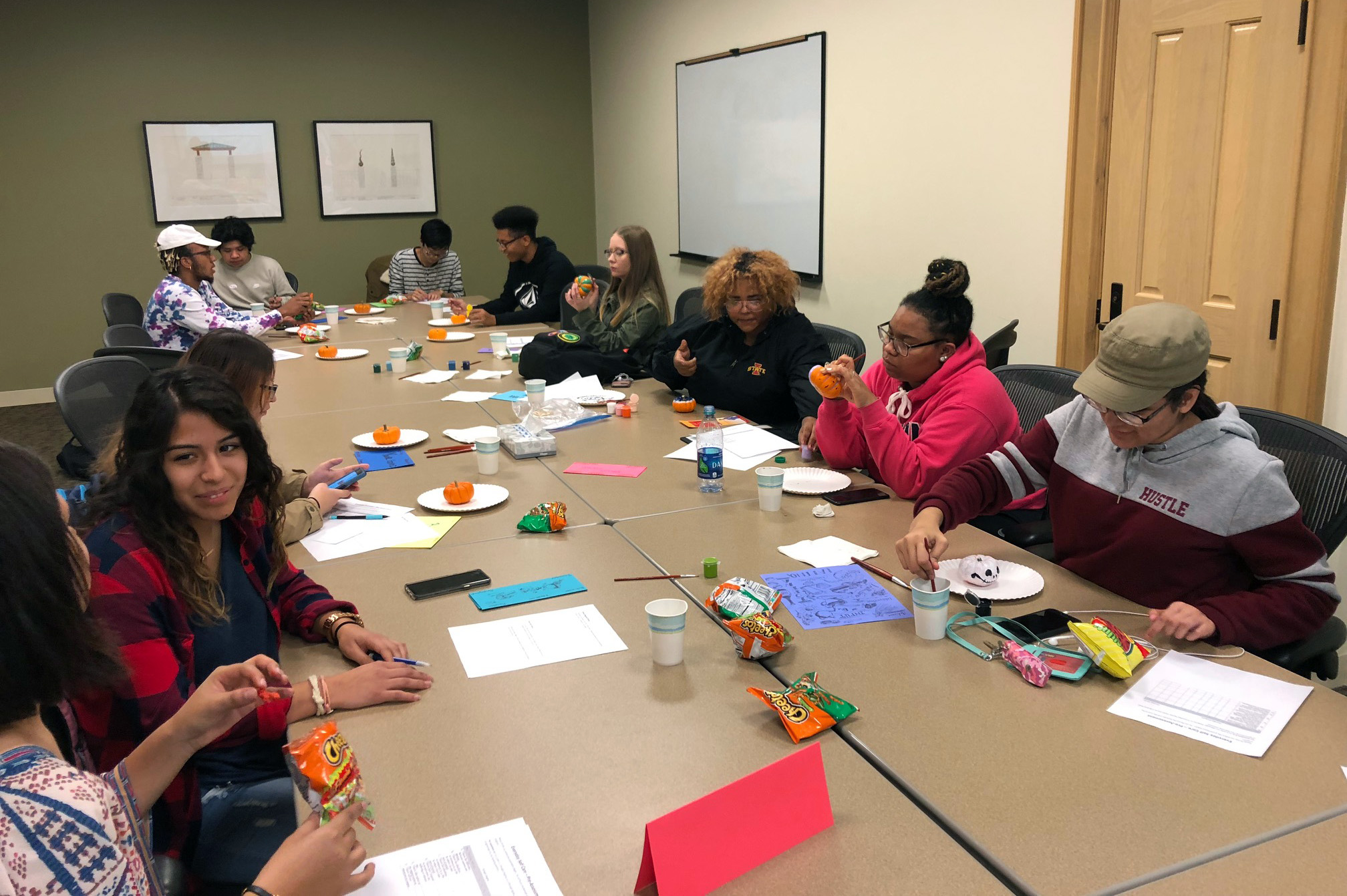