AMES, Iowa — A project by Iowa State University architecture students is one of three winners in the 2015-2016 Preservation as Provocation International Student Design Competition sponsored by the Association of Collegiate Schools of Architecture (ACSA).

The competition asked students to create a new visitor center and approach experience for the iconic Farnsworth House in Plano, Ill. “Collecting Pieces: Three Elements of Experience” by Bohyun Chang and Suk Lee, both of Seoul, South Korea, and now fourth-year undergraduate architecture students, was selected in the top three from among more than 175 submissions.

Chang and Lee developed their winning entry in the ARCH 302: Architectural Design IV studio taught by Lecturer Jungwoo Ji last spring. The award includes cash prizes of $2,030 for the student team and $1,300 for the faculty sponsor. Their design also will be exhibited at the ACSA 105th Annual Meeting in Detroit, Mich., in March and the American Institute of Architects National Convention in Orlando, Fla., in April.

Designed by architect Ludwig Mies van der Rohe between 1945-49 and constructed between 1949-51, the Farnsworth House is the first domestic structure designed with glass walls on all sides and without supporting internal walls. Since 2003 it has been operated by the National Trust for Historic Preservation as a public museum.

The ACSA competition sought proposals that explored the relationship between historic preservation and contemporary design and created a thoughtful new space that celebrates the past while addressing the aesthetic, cultural, spiritual, economic, practical and climatic challenges of the present and future.

Collecting Pieces
Instead of focusing on the Mies’ “masterpiece,” Chang and Lee chose to emphasize interactions between the Farnsworth House and its environment, and the variety of ways visitors can interact with the house and the landscape (ground, water and sky), both individually and in groups.

Their proposal replaces the existing bridge from the original visitor center to the Farnsworth House with a new design consisting of three functionally and spatially different areas: offices, gift shop, dining space and multipurpose room on the north; a “bridge hallway” in the center that connects the parking lot with the Farnsworth House; and a gallery that opens to the creek on the south.From the moment they enter the new building, visitors are on a journey where they experience dramatic views and level changes. A variety of small “boxes” (skylights, planters, art pedestals, seating, etc.) provide visitors with opportunities to define their own experience of the space. Even the rooftop is functional space that also provides views and a connection with the surrounding environment.”We struggled with the feasibility and practical aspects of the design, but also felt that the elements that were most challenging contributed to our success,” Lee said.”Their project was very thoughtful and sophisticated and related well with the site context,” said Ji. 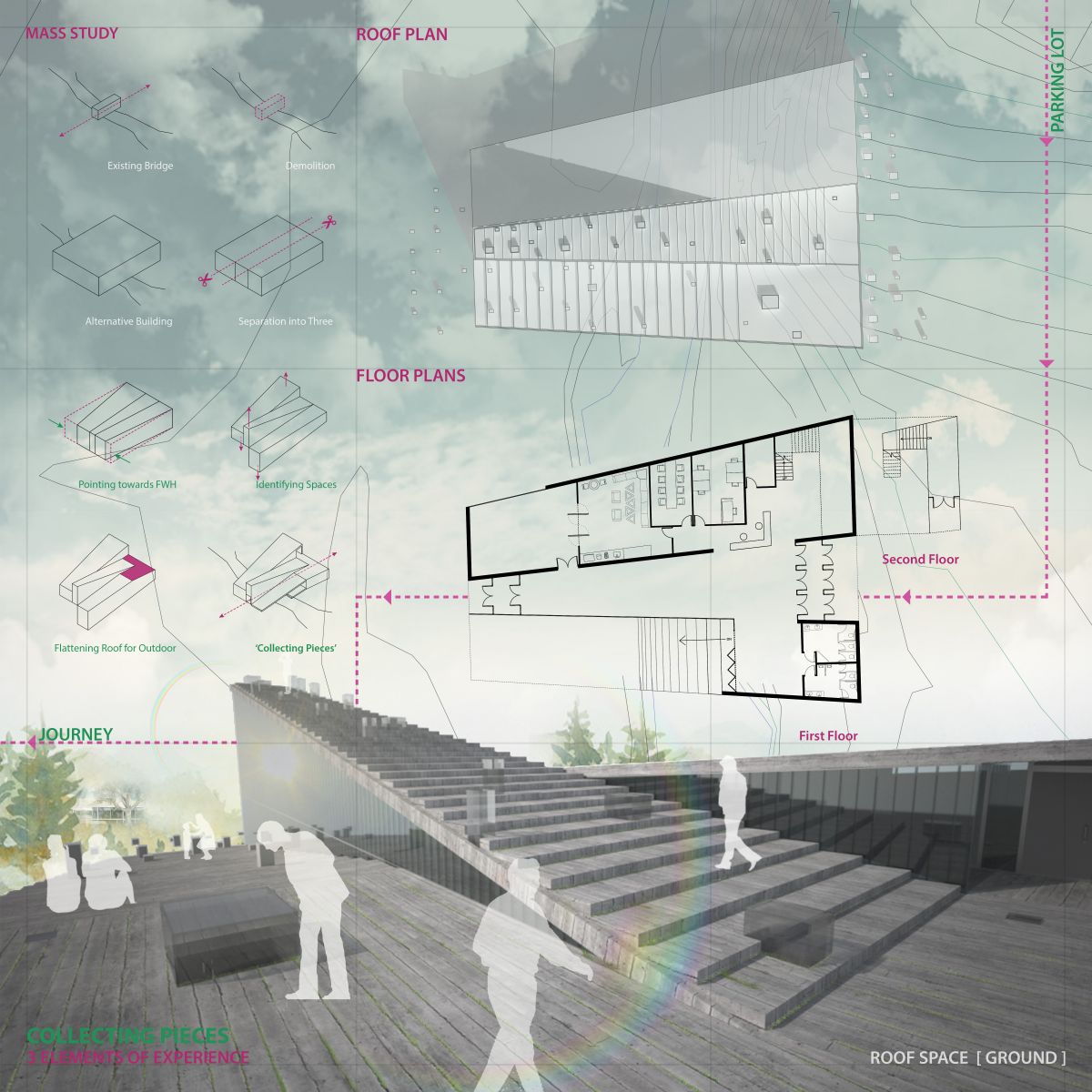 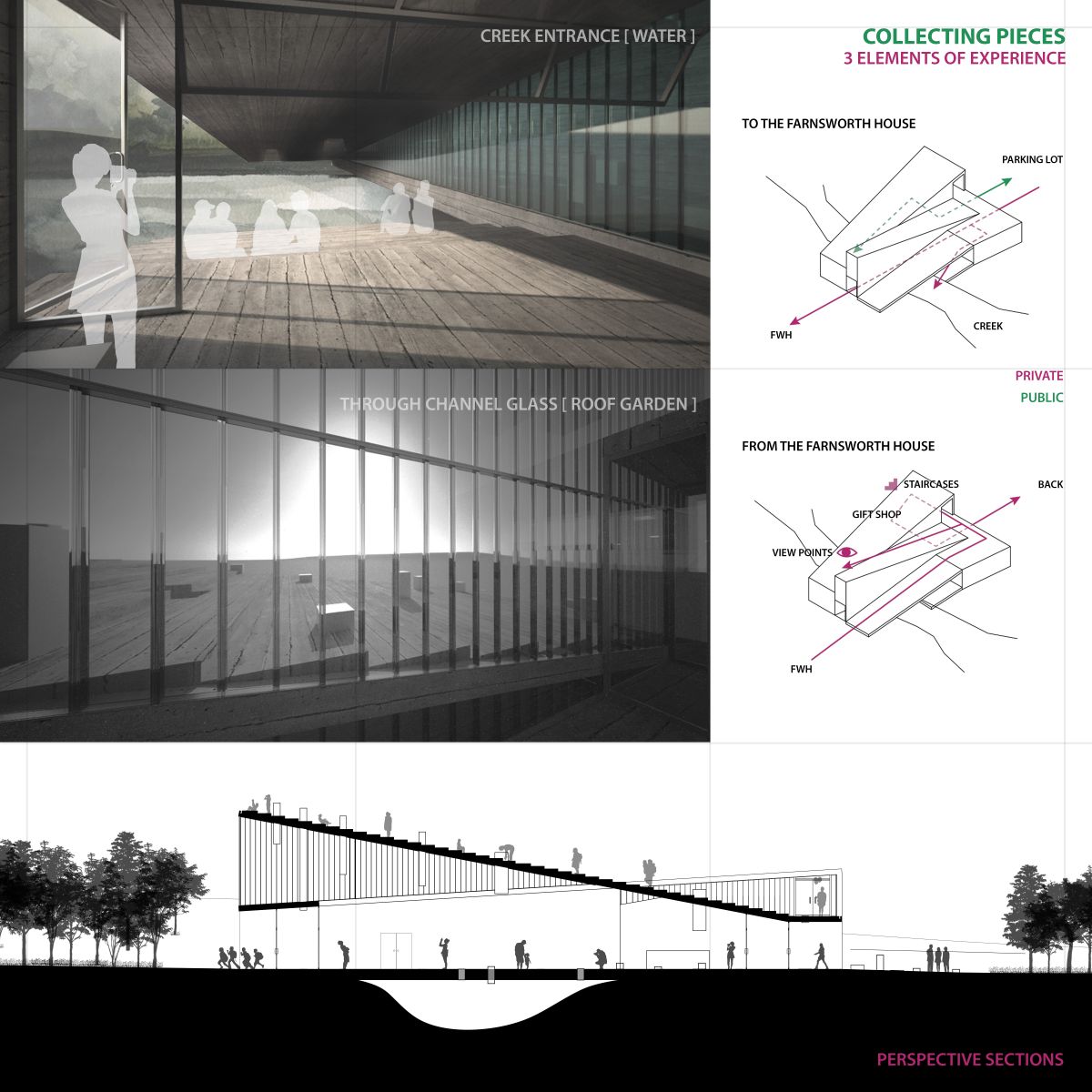 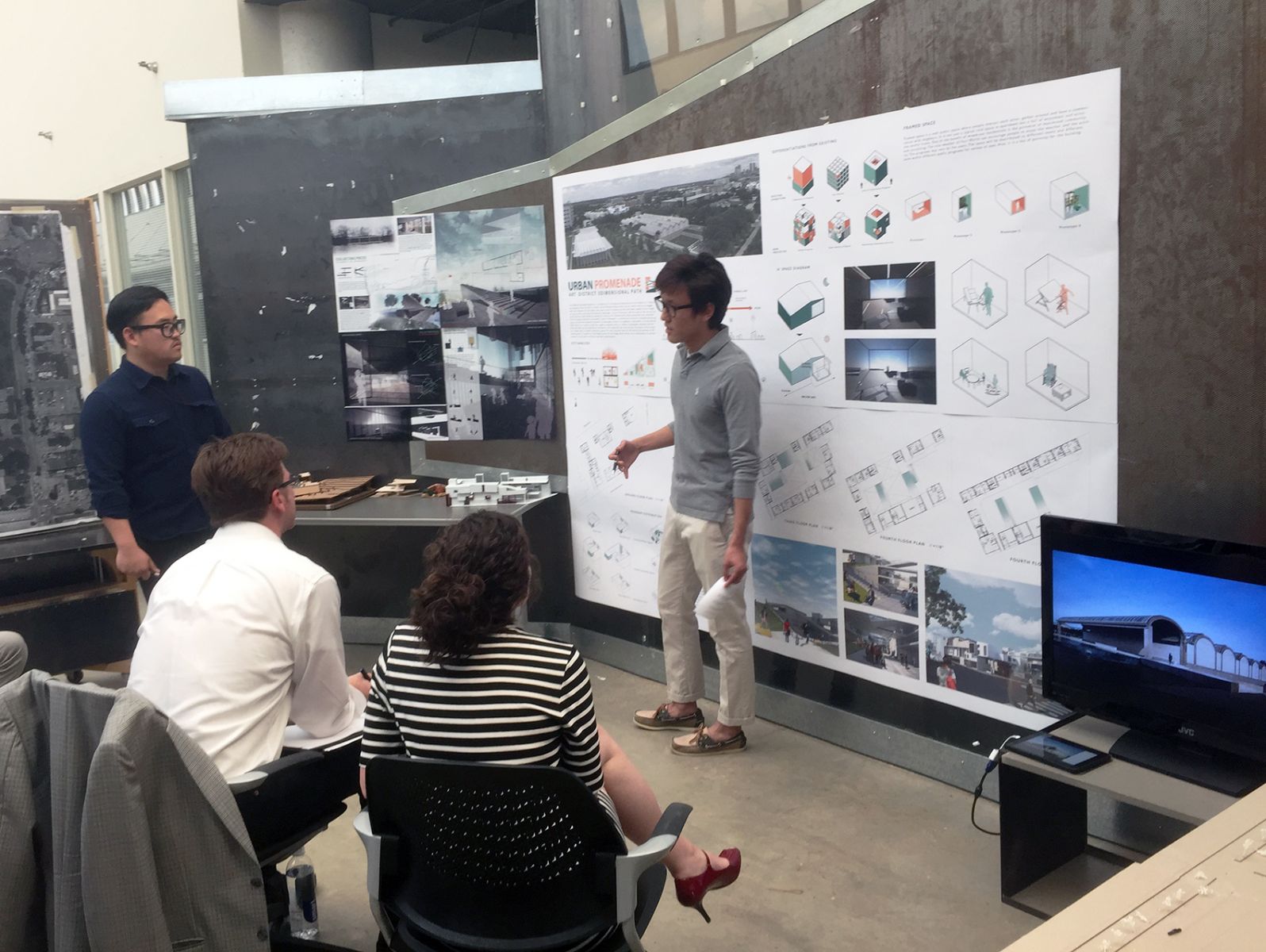