AMES, Iowa — Zoey Mauck is passionate about cycling. Given the choice, the Iowa State University senior will bike almost anywhere rather than hop on CyRide or drive. Her laptop is covered with bike-related stickers, her Instagram feed features her numerous rides and the people she rides with, and wherever she is on campus, her Liv Avail road bike is always parked outside.

“I grew up biking. I always had hand-me-down bikes from my sister and then I got my own bike — a vintage Schwinn Traveler — in seventh grade,” said Mauck, of Des Moines. “That’s when my passion really was ignited.”

After her freshman year at Iowa State, Mauck spent the summer cycling from Charleston, South Carolina, to Santa Cruz, California, with Bike & Build, an organization devoted to affordable housing that brings together young adults to bike from coast to coast, building homes on the way. She served as an intern with the Des Moines Bicycle Collective during the summer of 2016, assisting with marketing for the BCycle bike-share program and helping to plan a women’s ride, Women Rolling Collectively.

Last spring, Mauck received a Focus Grant — funding through Student Government for creative projects done outside the classroom — for “The 24%,” a project to document women cyclists and the issues they encounter while biking.

“Fewer than one in four bike trips completed annually are by women, so I created a portrait and interview series to ‘change gears’ in the cycling community,” Mauck said.

“Documenting women who do choose to ride exposes the variety of backgrounds they come from and the challenges they face while biking. By highlighting some of these issues, I can help people gain a better understanding of how to break barriers to increase that 24 percent.”

Mauck, who is working toward double degrees in landscape architecture and community and regional planning, plans to pursue a career in bike and pedestrian planning and design.

“I want to see a world that’s more accessible to bikes everywhere and not just in hip cities,” she said. “Even small towns deserve adequate bike and pedestrian infrastructure.”

As an intern for the Iowa’s Living Roadways Community Visioning Program — a partnership between the Iowa Department of Transportation (IDOT), the nonprofit Trees Forever and the ISU Department of Landscape Architecture — Mauck has worked with small towns in Iowa to develop transportation enhancement plans. In recognition of her interest in community transportation planning and her skills in landscape architecture, she recently was selected as the inaugural Mark Masteller Intern, named for a longtime Community Visioning Program adviser who was the IDOT’s chief landscape architect until his retirement in September.

Mauck’s latest project provided a new opportunity to help a rural Iowa town develop its bicycle and pedestrian infrastructure. This semester, Mauck worked with the Jefferson Parks and Recreation Department to develop a plan for a safe trail system for adults and children in the community. The department received a grant from the US National Park Service’s Rivers, Trails and Conservation Assistance Program aimed at helping residents spend more time outside and move more easily between local parks and schools.

When he was approached for help with the project, Tom Neppl, an ISU senior lecturer in landscape architecture, invited Mauck to take it on as an independent study.

“She understands what it’s like to ride a bicycle through a community and she understands the appropriate designs behind a well-connected community,” Neppl said.

“At first, I didn’t think I knew how to do it,” Mauck recalled, but she embraced the opportunity to explore with community members their vision for the town and how safe trails could be incorporated.

Mauck presented proposals and solicited feedback at four public meetings in Jefferson. It was experience she couldn’t gain in a classroom, and it provided critical insights about working with a community.

“When they are commenting, ‘oh, you need more pictures,’ you realize that pictures actually help them understand what you’re talking about,” Mauck said. “It’s not just a requirement for your class.”

To gather visuals that truly captured the town, Mauck attached a camera to the handlebars of her bike and rode through Jefferson taking photos and recording video, which she shared at the next meeting.

“It was a literal presentation from the vantage point of sitting on a bicycle seat,” Neppl said. “From my read on the people in the room, it was clear that seeing their community through her eyes as a cyclist allowed them to see it in a new way as well.”

Vicky Lautner, director of Jefferson Parks and Recreation, appreciated Mauck’s ability to respond to public comments and design something that will meet the community’s needs.

“That really impressed me, for her to take so much time to figure out, okay, what’s best for Jefferson?” Lautner said. “She really considered what residents want for the community.”

“Without them, the project wouldn’t have been as strong,” Mauck said. “About 50 percent of [the network I developed] came from their own ideas about what they wanted for Jefferson.”

Mauck will present the completed trail plan in a final review today, Dec. 11, at the ISU College of Design. Lautner, other community members and representatives from the National Park Service’s Midwest Regional Office in Omaha will be in attendance. Following the presentation, Mauck will provide the Jefferson parks and rec department and the NPS with all of the designs for use in grant applications for funding to implement the proposed trail network.

Next semester, Mauck will gain valuable insight into transportation planning from a European perspective. She received a $1,000 Study Abroad Grant from the Honor Society of Phi Kappa Phi to study at the KTH Royal Institute of Technology in Stockholm, “a city with great walkability and bike accessibility,” she said.

“I feel like there’s a lot of missed opportunity for more environmental impact,” Mauck said. “There’s no reason to drive [in many communities] because everything could be made [more bicycle and pedestrian friendly]. It’s just a matter of making everything safer and more comfortable for people.” 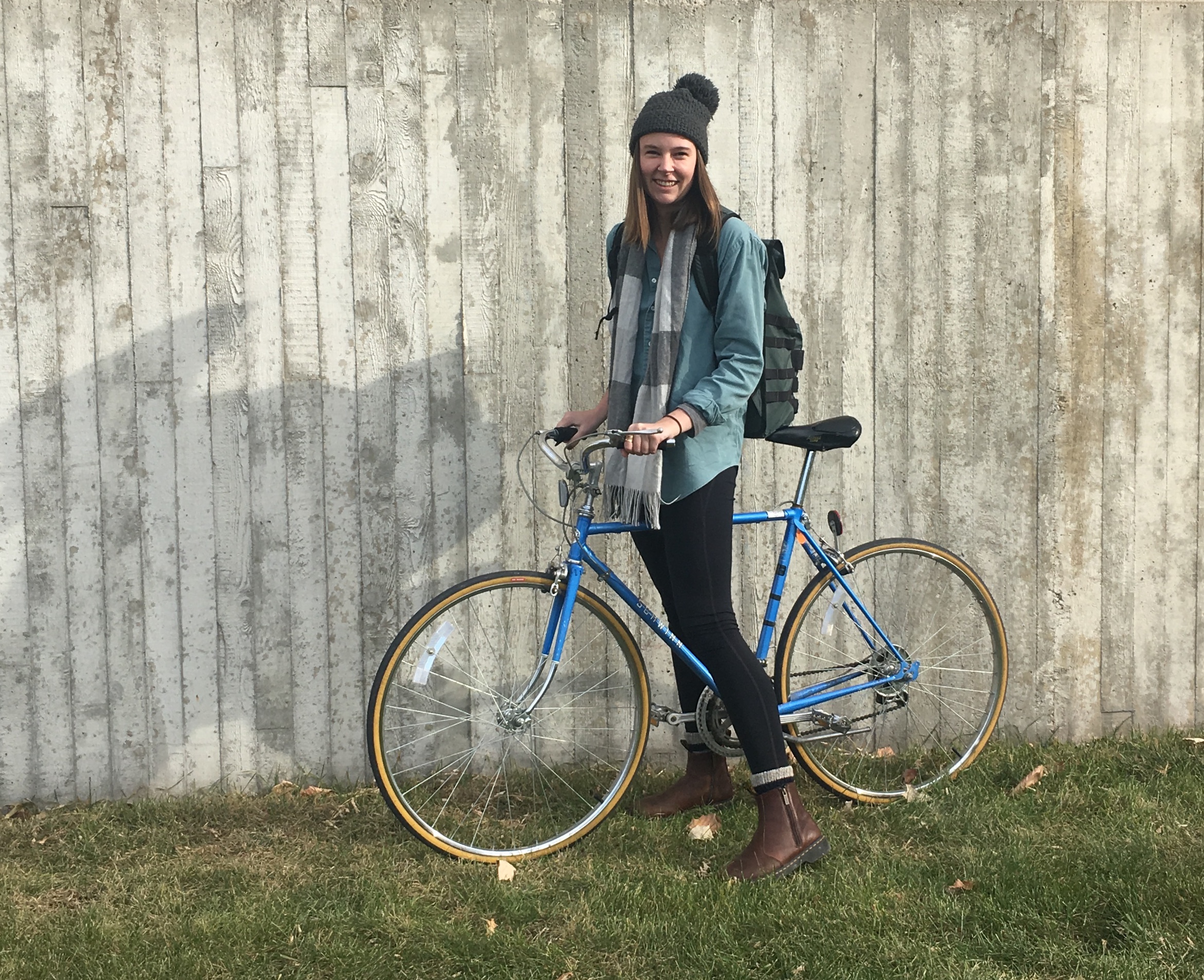 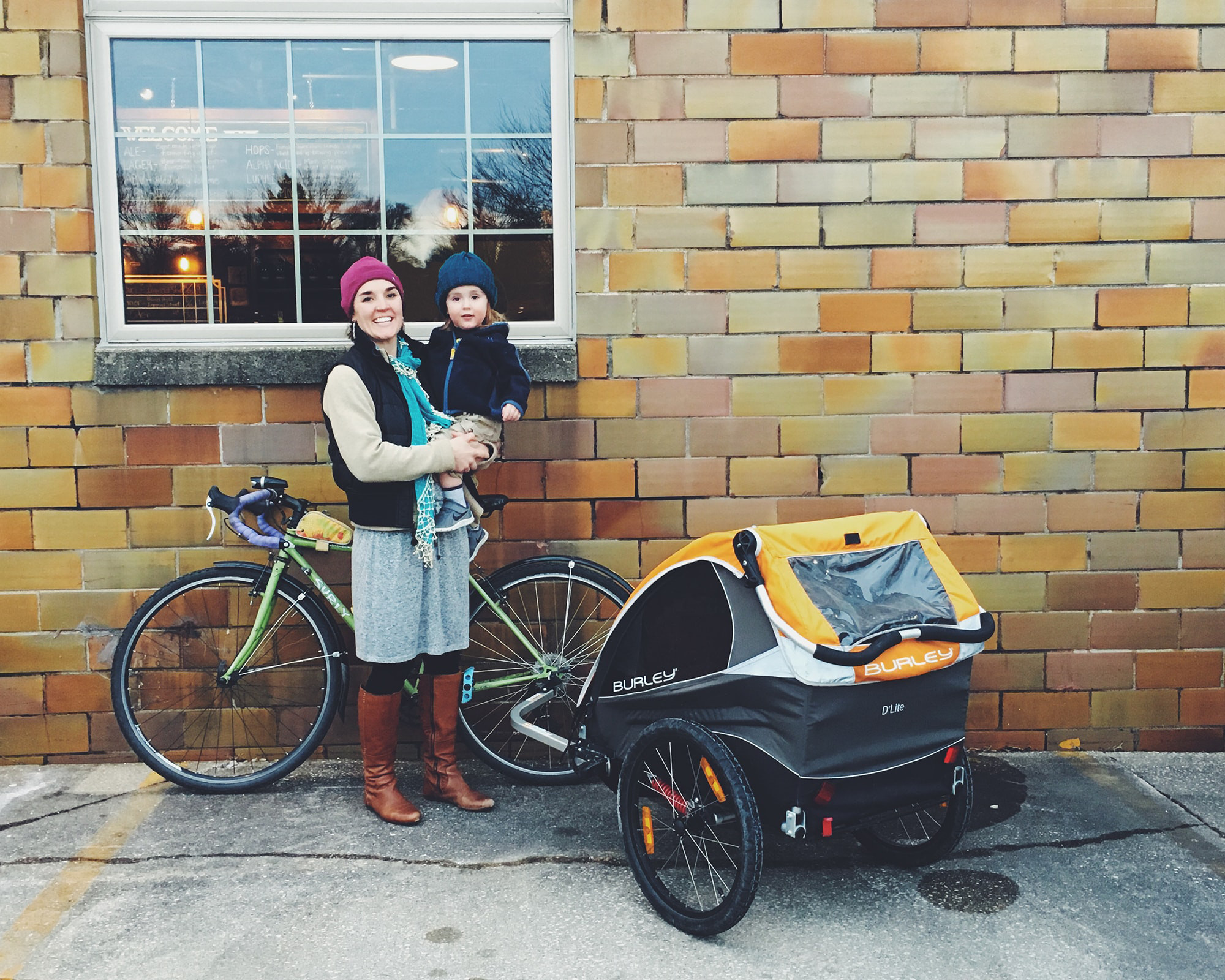 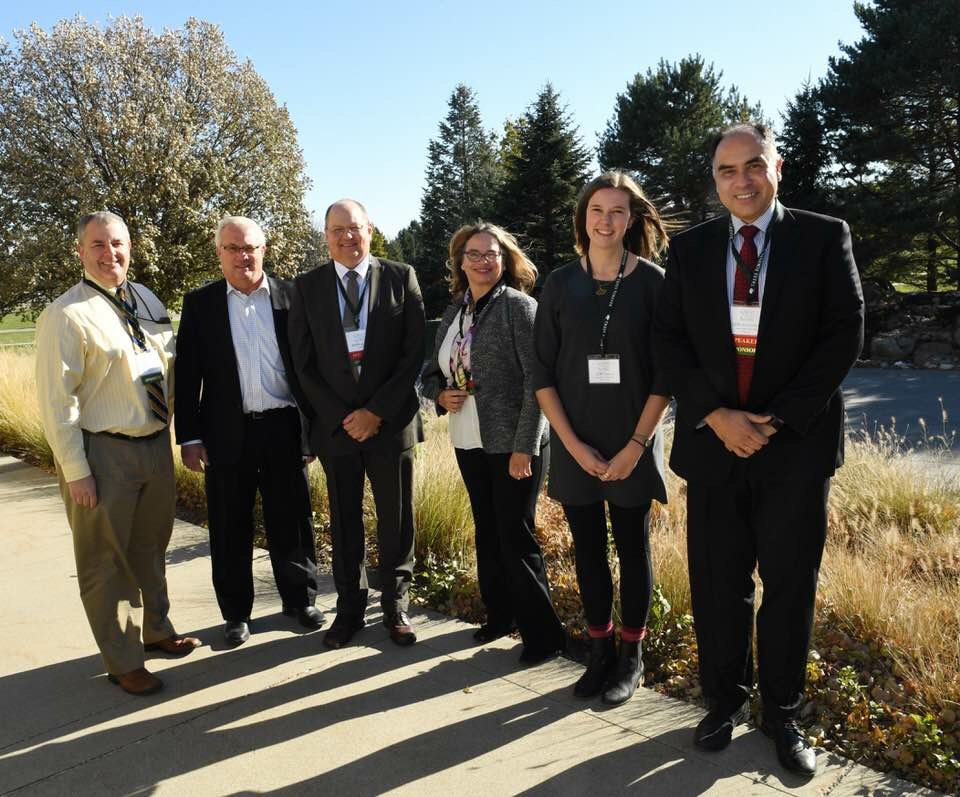 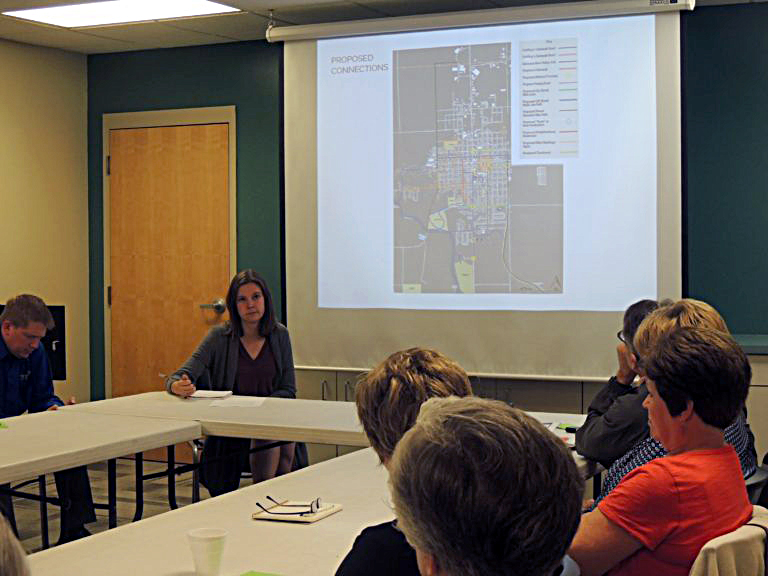 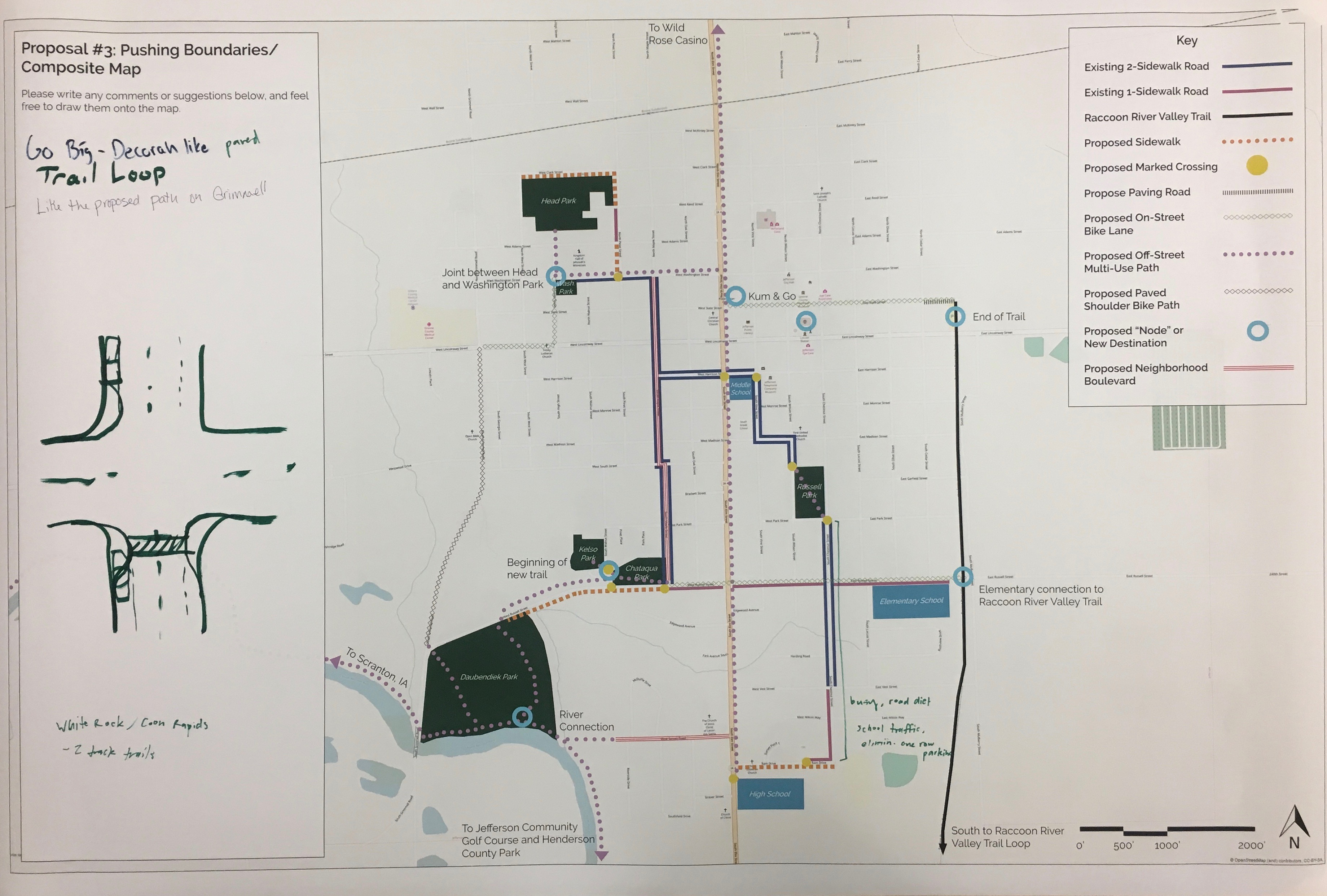