AMES, Iowa — A workshop designed to introduce more women to computer coding and its applications in design will culminate with an exhibition and lecture Wednesday, Oct. 18, at Iowa State University.

Funded in part through an ISU Inclusion Initiatives Grant (formerly the Women’s and Diversity Grant program), the “CyBorg Sessions: Women in Robotics” series targeted students who identify as female, although all students were eligible to participate.

“There is a huge gap of women in technology,” said Leslie Forehand, an architecture lecturer in the College of Design and one of three faculty who organized the workshop. “This is our way to challenge that.”

Of the 21 participants, 16 are women. The group includes undergraduate and graduate students in architecture, electrical engineering, graphic design, industrial design, integrated visual arts and landscape architecture. Most had no prior experience with robotics or coding, Forehand said.

Beginning Sept. 6, the workshop has met every Wednesday evening from 5:30 to 8 p.m. in the Communications Building. Instructors include Forehand and architecture assistant professors Shelby Doyle, the Daniel J. Huberty Faculty Fellow in Architecture, and Nick Senske, who together lead the ISU Computation and Construction Lab (CCL), with assistance from CCL associate Erin Hunt and undergraduate research assistants Nick Loughrey and Sarah Schneider.

Each student was given a small robot called a “turtle” and supplied with codes they could experiment with to develop their own designs. Connected to a laptop by a USB cable, the turtle receives instructions programmed by the student to draw a specific design on paper.

The turtle, developed at the Massachusetts Institute of Technology in the 1960s as a teaching tool for computer programming, is a simple command system that is good for beginners, said Senske. The goal is to introduce students to the technology and inspire them to explore broader applications for their different disciplines.

“We’re drawing with computers, which we’ve done for decades, but it’s about how we work with computers with artificial intelligence, with automation, with things that computers do really well, instead of just drafting,” Senske said. “It’s how you can use the computer to think about problems that you couldn’t think about another way.”

Madeline Gannon, a self-described “robot whisperer” and founder of Atonaton — a research studio devoted to exploring the untapped potential of emerging technologies — will serve as a guest critic in a review of the students’ work from 1 to 3 p.m. Wednesday, Oct. 18, in the College of Design’s Gallery 181, and will present a public lecture at 5 p.m. in Kocimski Auditorium, 101 Design.

The work will be displayed through Sunday, Oct. 22, in the gallery, and students will use feedback from the critique to refine their designs in a final workshop session that evening.

Kelly Devitt, a senior in integrated studio arts from Story City, is creating a cloud drawing for the exhibition.

“They gave us a code to draw circles and I altered it so it only draws a fourth of the circle, then it turns 49 degrees and draws that fourth again and again eight times,” Devitt said.

Having begun the workshop with no knowledge of coding, Devitt is excited by the overlap between technology and art and is pondering how to use her new-found skill within her major.

“I can see myself, down the road, incorporating movement through technology with my ceramics,” she said. “I’m not sure how, but it could be a neat interface.”

Graphic design graduate student Monica Pearson, Ames, is also considering how to incorporate coding in her future profession. “It’s another tool you could use to make something different from what the mainstream is doing,” she said.

Just being exposed to the programming language and process has been valuable, said Aaron Hauptmann, Ames, a graduate student in architecture.

“I’ve learned that I want to learn how to code more than I’ve learned how to code,” Hauptmann said. “After this, I’m going to do some online learning programs about coding to try to understand better what’s going on. I think there’s a real potential to use computation at a more interesting level for architecture than to just draw lines.”

Like Devitt, Hauptmann altered a code provided at the beginning of the workshop to change an angle on a tree branch “so it looks a little less tree-like,” he said. “Then I’m going to overlay that with other codes” to create, among other things, a mirror image in a different color on the other side of the page.

Research assistant Loughrey, a fifth-year architecture student from Shakopee, Minnesota, worked with faculty member Doyle over the summer to prep the turtles for the workshop. With no prior coding experience, Loughrey used online tutorials and other resources to teach himself about them. He also helped Senske write the initial codes for the workshop.

“While [Senske] has the knowledge to do what I did in a day, it’s been an important task to learn for myself, and my learning how to do it is providing the faculty some insight on how to teach others,” he said. 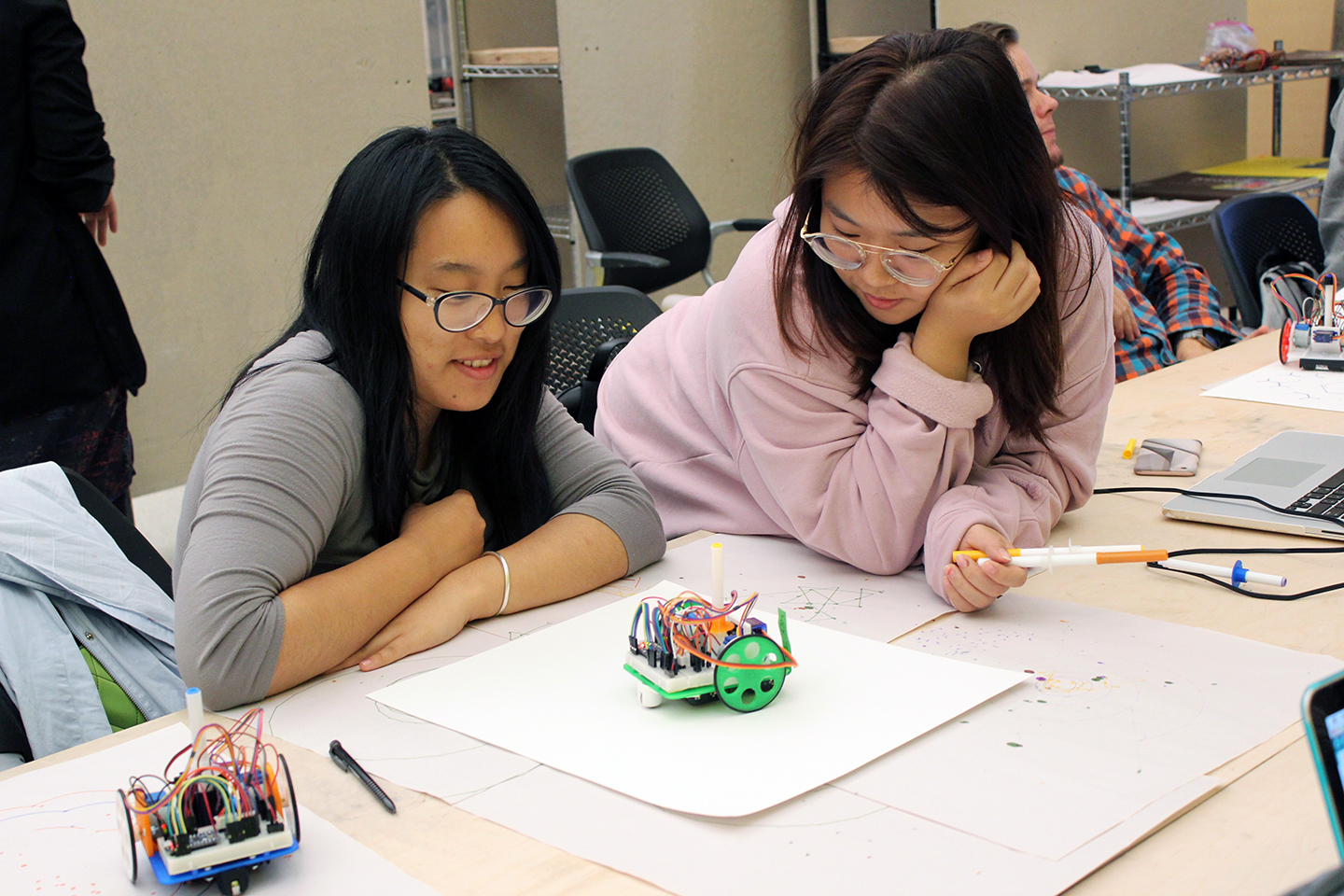 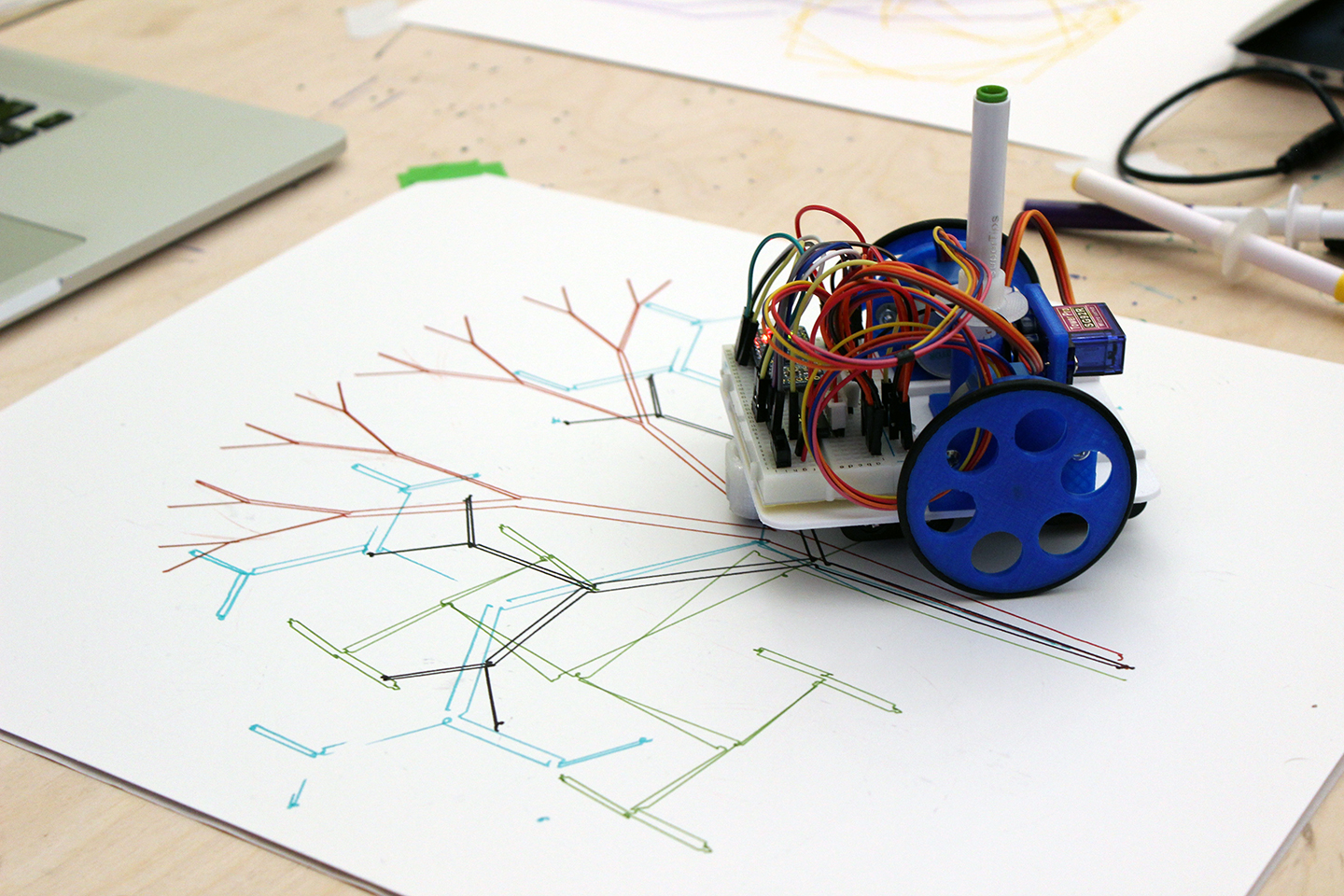 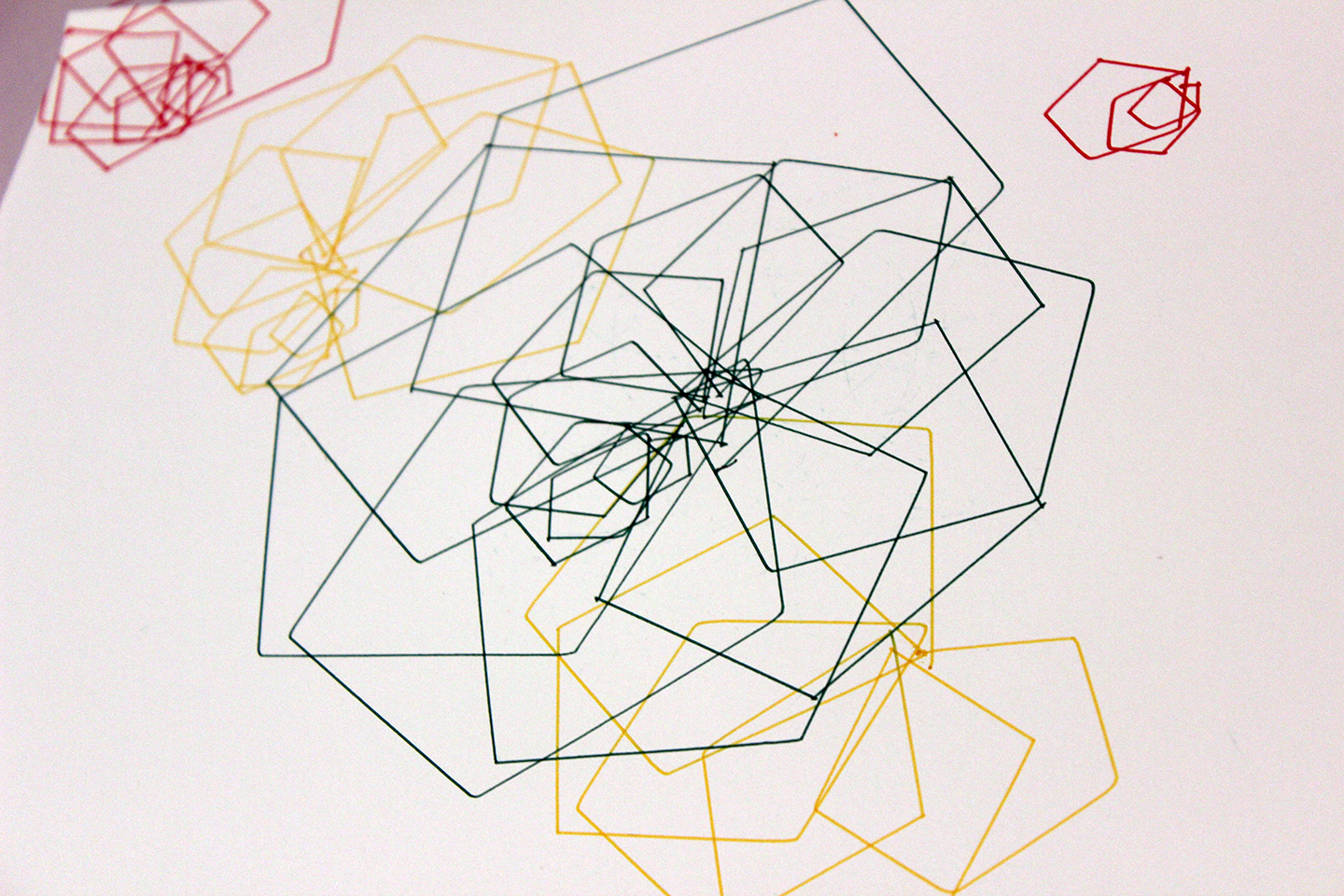 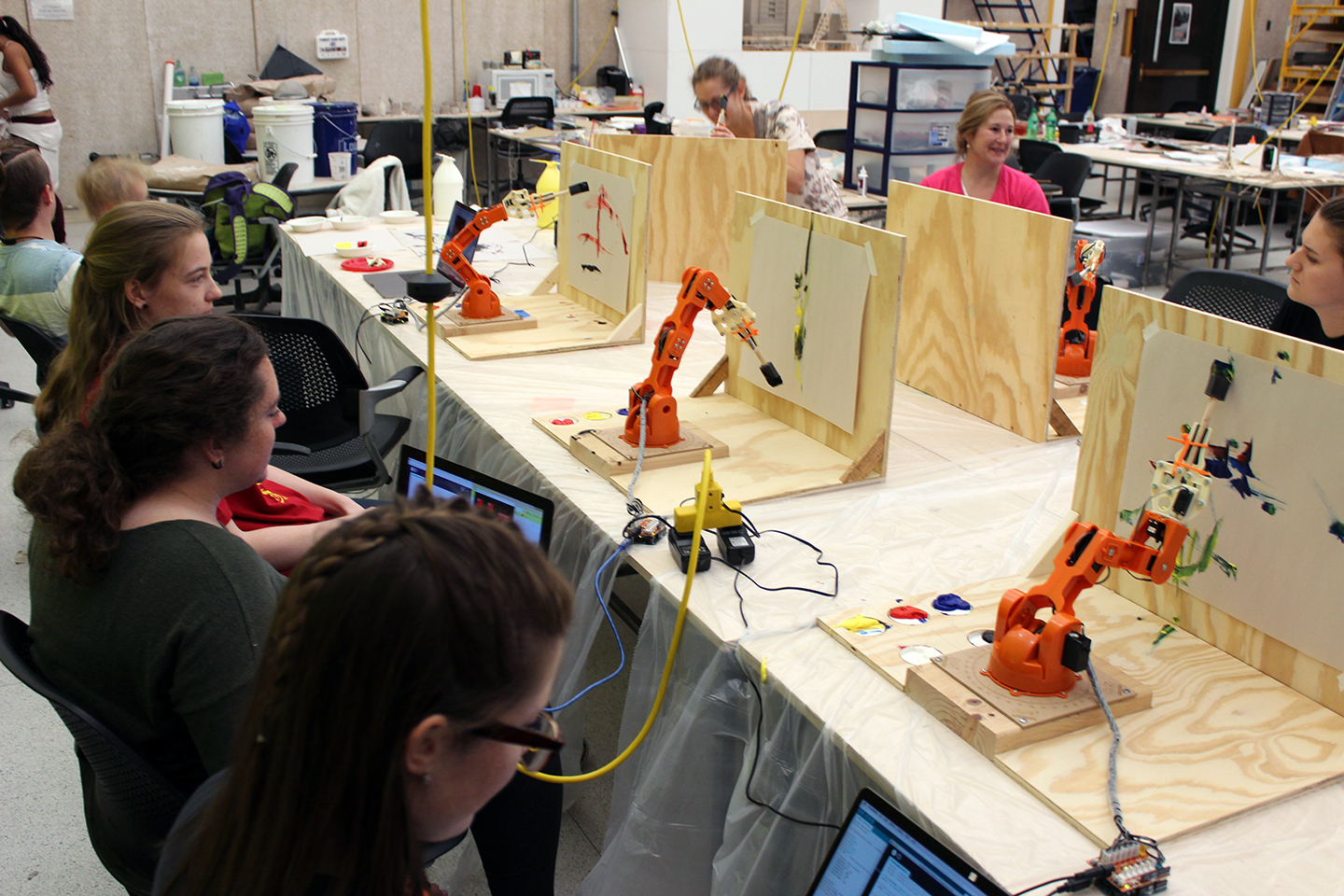 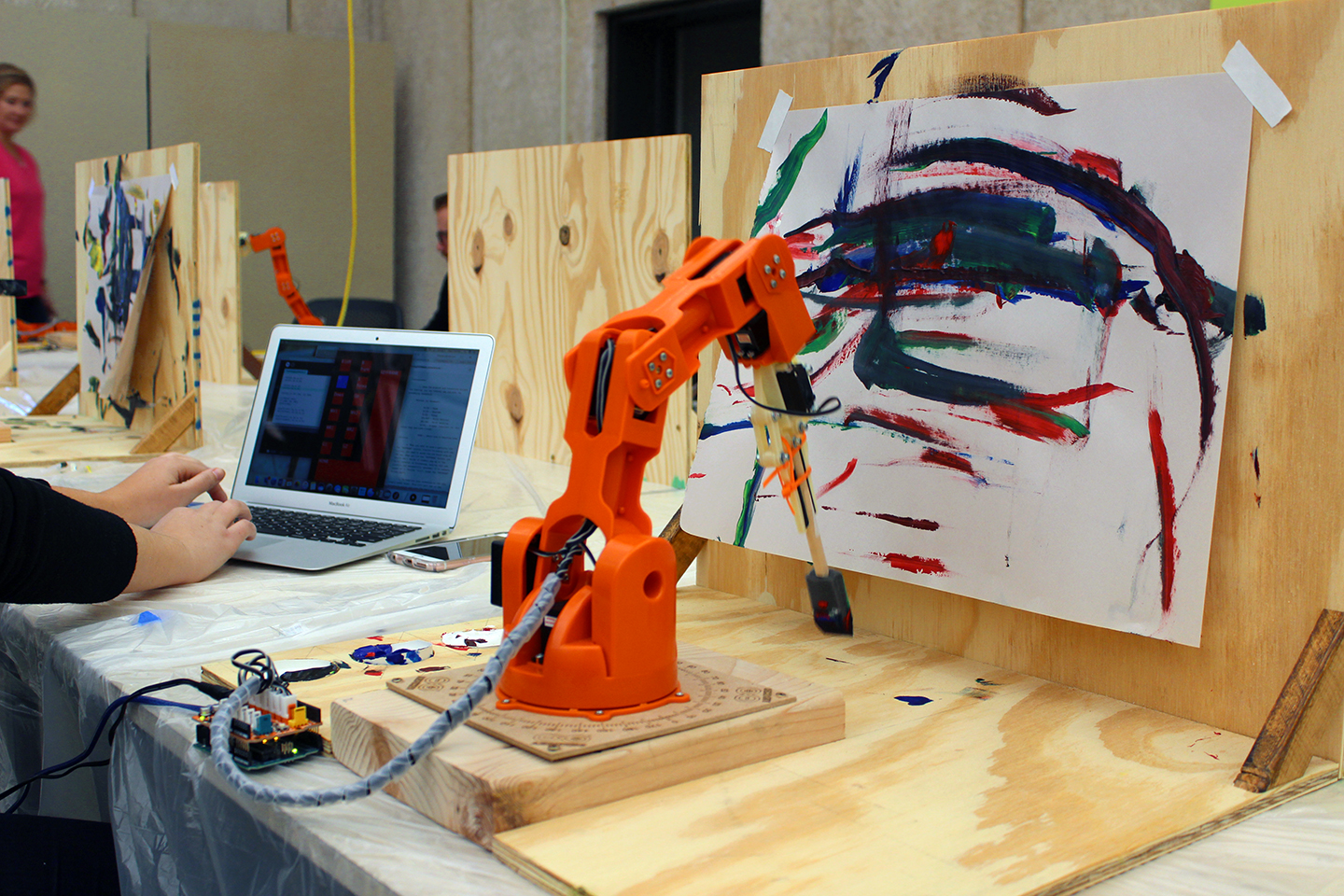 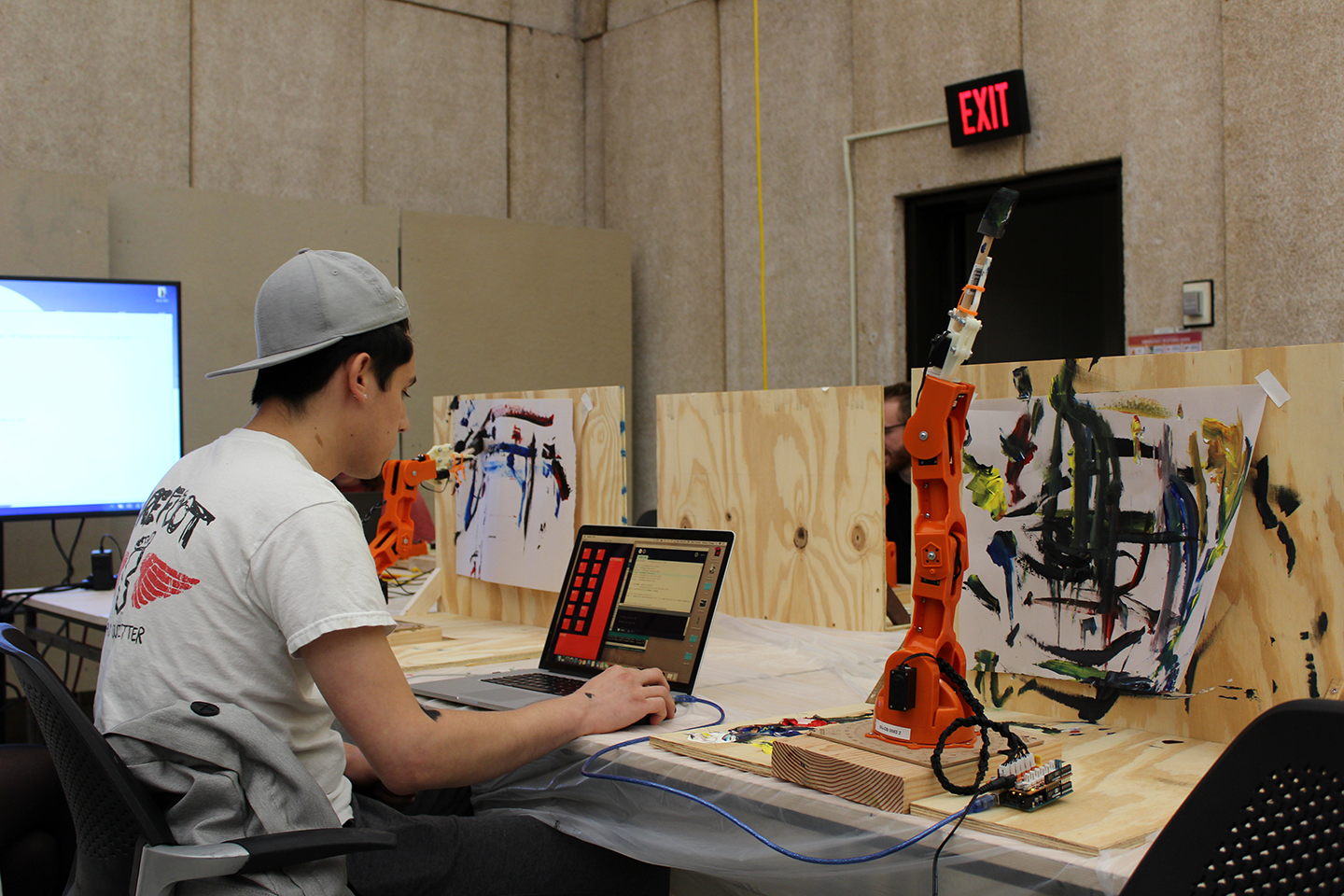