AMES, Iowa — In the past few years, the west side of the Iowa State University campus has seen significant changes, with several new buildings completed or under construction. Visitors to the College of Design this fall are being greeted with a greener, more welcoming entrance plaza intended to enhance the connection with its growing neighborhood and invite people in.

“President and Mrs. Leath believed that you’re inspired by your landscape and being outdoors, and we should help inspire students with the campus environment,” Martin said. “We thought some of the funding would be well spent on improving the front entrance to the College of Design to make it more inviting.”

While the college has expanded with additions completed in 2000 and 2009, no major changes to the approach from campus had been made since the building opened in 1978. The vast expanse of concrete contributed to harsh glare and a heat island effect, and over the years, “it had settled at least four or five inches and was cracked and broken in several places,” Martin said.

“The crabapple trees had outgrown their slots in the pavement. Together with the bike racks in that location, the trees created a physical and visual barrier that impeded views and discouraged full use of the space,” she said.

Goals for the project included

The design was developed late last spring and installation took place over the summer. Rogers and Hunter served as design leads and site managers on the project, with considerable student input.

“We asked the students to create a space that would engage and invite people to linger and interact,” Hunter said.

Robinson and Tashjian, who produced many of the sketches and computer renderings for the project, continued as CDL interns for a few weeks after graduation in May to help finalize the design. Landscape architecture student and facilities planning and management intern Shibani Debnath, New Delhi, India, also worked on the project, taking GPS measurements to determine the slope and preparing the quote document for the contractors, among other contributions. And architecture professor Arvid Osterberg assisted with interpretation of ADA guidelines.

“It wasn’t easy because of the site being diagonal with the circular opening for the staircase inside all these angles,” Martin said. “We shared ideas and revised as necessary based on budget, time frame, long-term maintenance and other constraints. It was a great collaboration with lots of give and take.”

“The lifespan of a healthy crabapple is 30 to 50 years, so these had had a long life,” Hunter said. “They were so low-spreading that they interrupted the view; we replaced them (in different locations) with aspens, which have narrow trunks and a higher canopy. This helps frame the building and how you see out, increasing the connection between the college and the rest of campus,” he said.

“We wanted to be sure it was something people would use and enjoy,” said Robinson, now a landscape architectural coordinator and urban planner with HDR in Omaha. “We cut up the hardscape to bring some comfort into what was a cold space, and the plants really bring it to life.”

The existing flow of traffic helped generate the design, Rogers said. “We stood outside during class-change periods to see where people were walking, so we could enhance those areas,” he said.

Meeting ADA requirements also shaped the overall design. For instance, the site didn’t permit the necessary elevation transitions for an accessible route adjacent to the retaining wall on the plaza’s east side, so that became an opportunity to introduce native plantings, Martin said.

The team completed the project in time for fall semester. The new bike racks, trees and perennials were installed the week before classes resumed in August.

“It was a great project to cap off my Iowa State experience,” Robinson said. “I loved working as a team, doing the design and analysis and knowing what we did will be a part of the college environment for years to come. I think it’s a good improvement.” 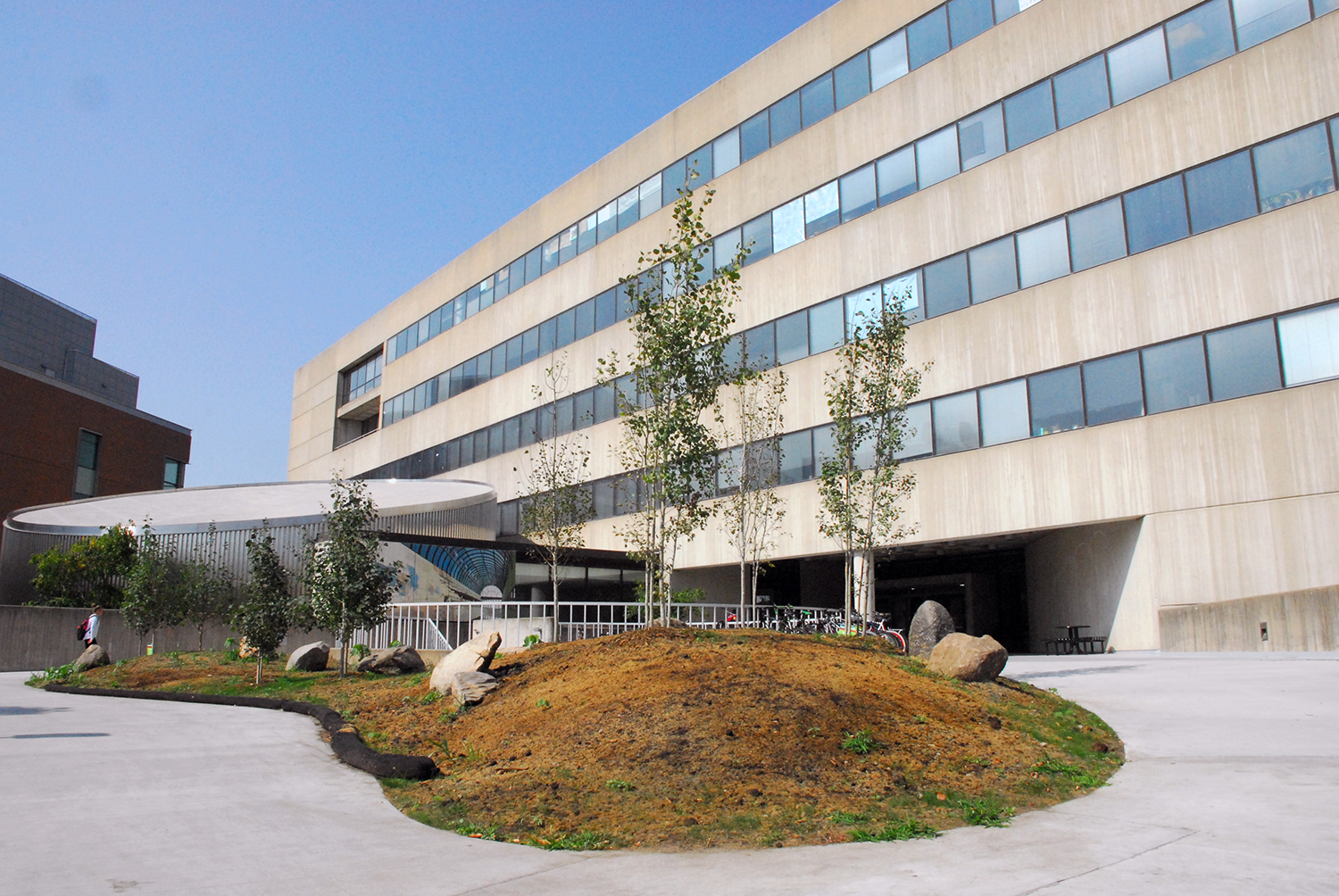 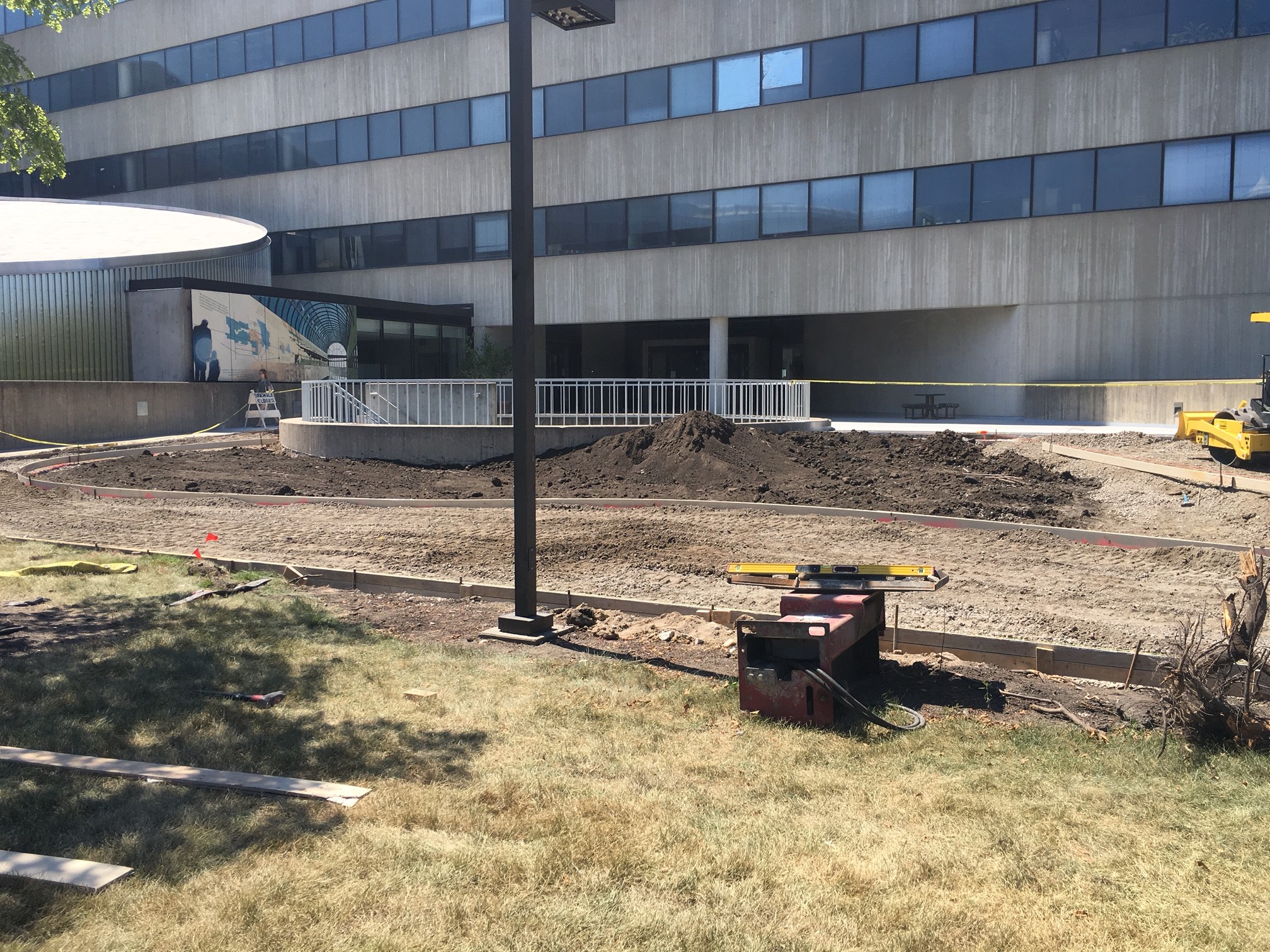 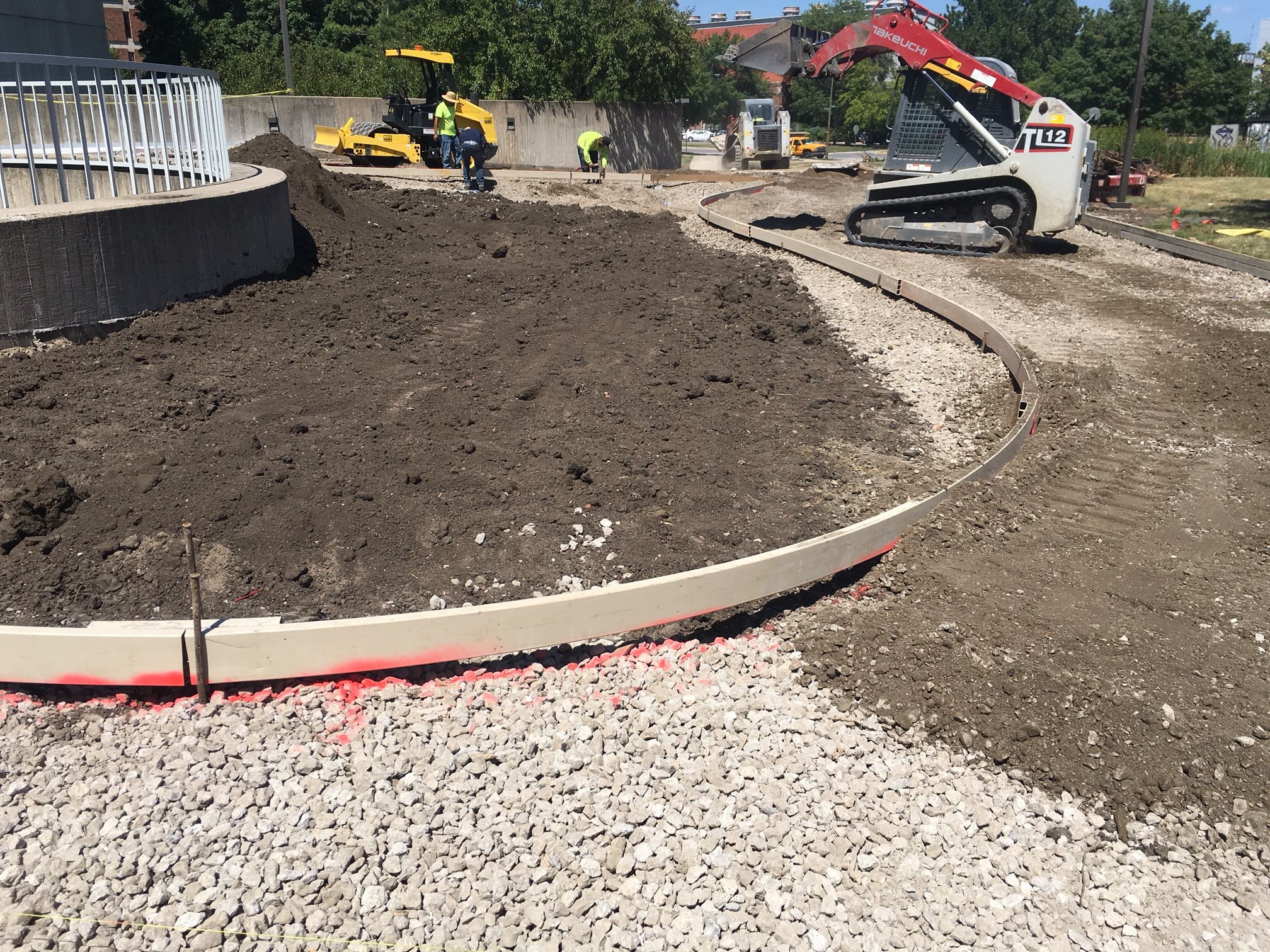 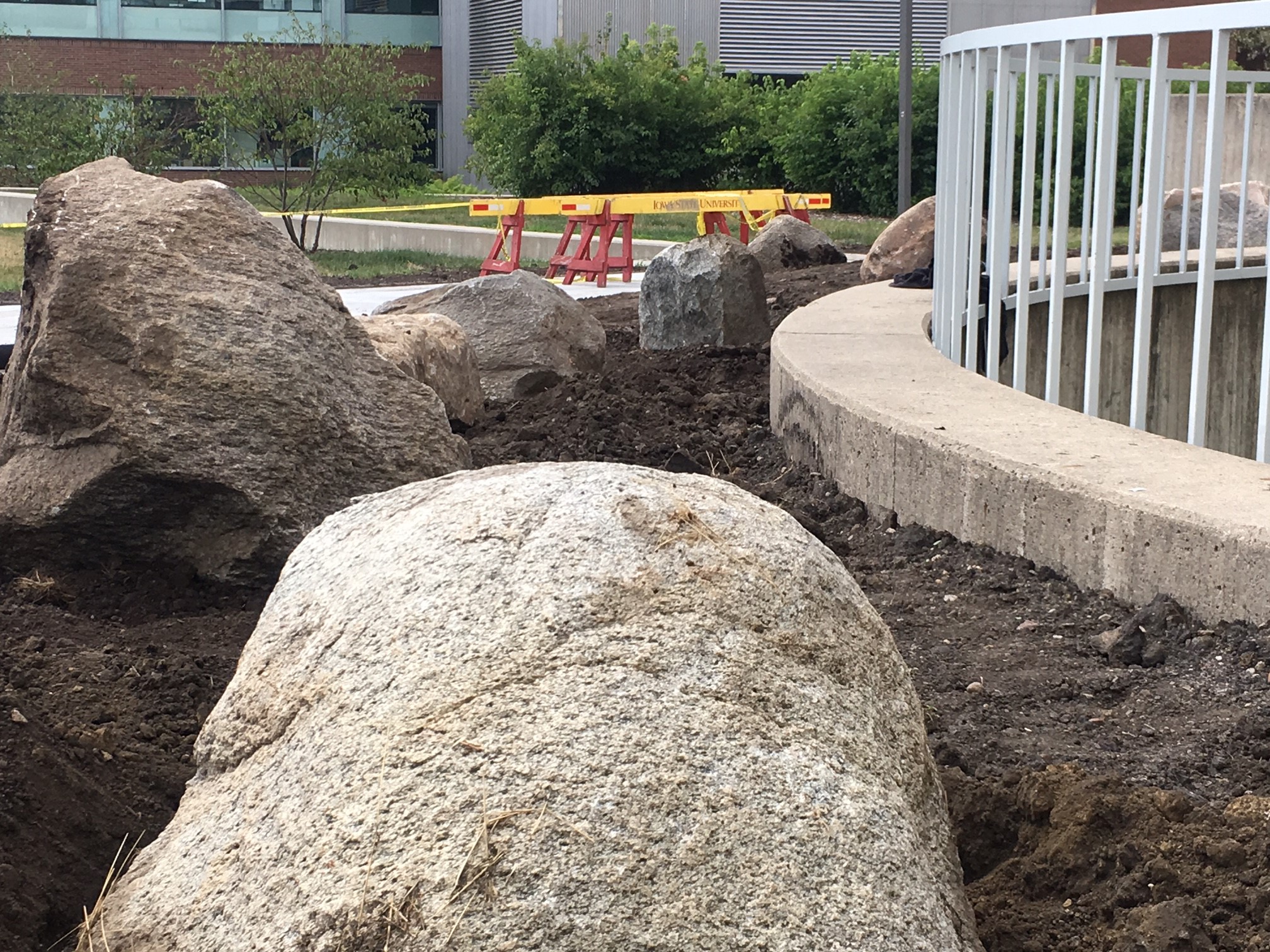 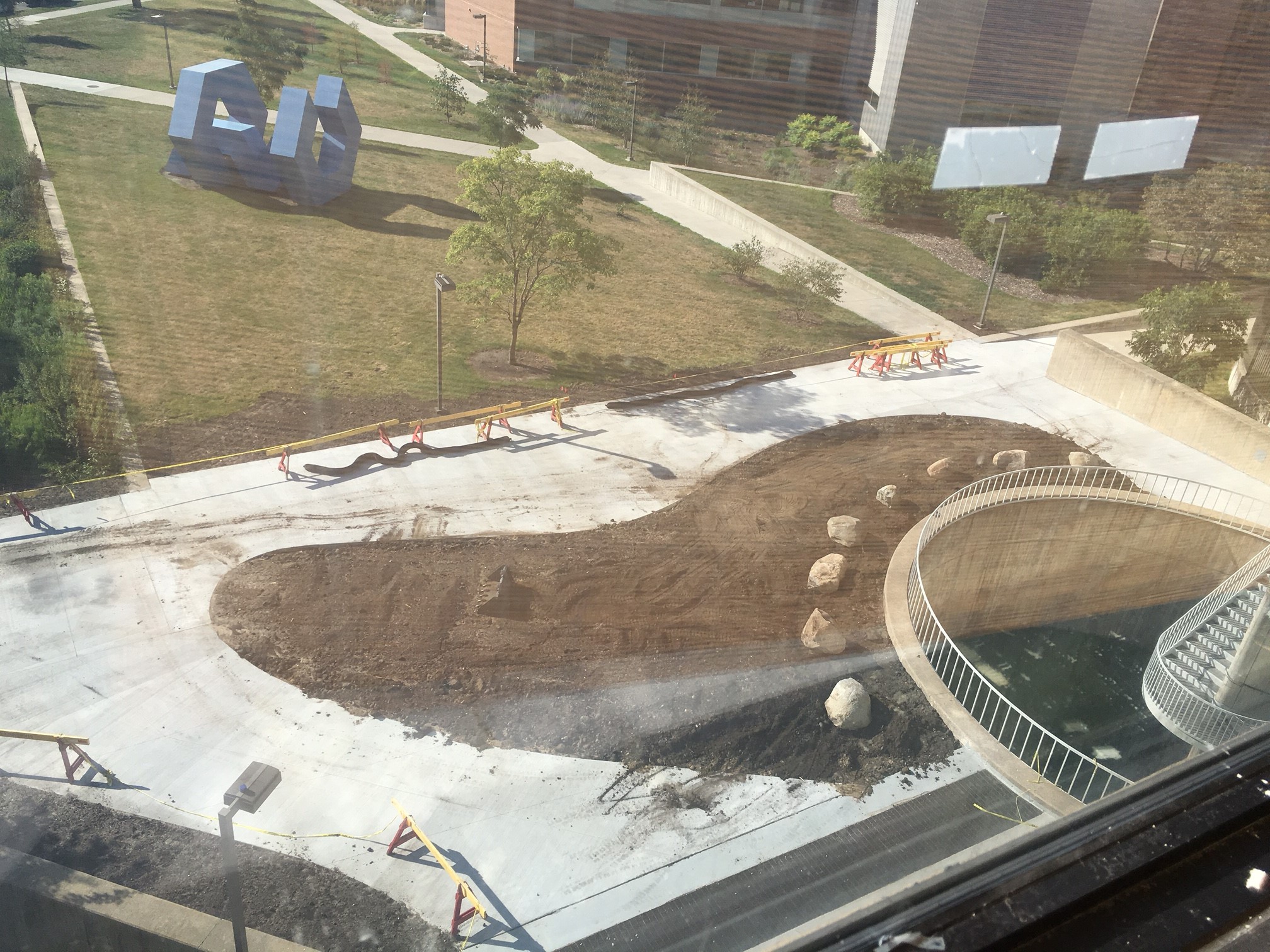