The winning entry, “Open Book Nook,” was one of four proposals submitted by students from three universities — Ball State University, Muncie, Ind.; Dalhousie University, Halifax, Nova Scotia; and Iowa State — at the invitation of the nonprofit Friends of the Library.

“We had just completed an exterior renovation of this building and thought we could enhance the exterior further with public art,” said library director Nancy Trask. “We wanted to attract more people to the library and make them more aware of the resources we offer.”

The Friends initially considered purchasing a set of small bronze sculptures to install outside the library, Trask said. When the organization sought community input, former Winterset resident Kevin Lair — then an assistant professor of art and design at Indiana University Bloomington and now a lecturer in architecture and interdisciplinary design at the ISU College of Design — encouraged the group to expand its vision by hosting a juried university competition for a site-specific artwork.

“I proposed this as an opportunity to obtain fresh insights into our community and library and to build new relationships,” Lair said. “It was a way to support the arts and the library’s promotion of discovery and education.”

On behalf of the Friends of the Library, Lair contacted art and design colleagues at Ball State, Dalhousie and Iowa State last fall to invite participation in the Winterset Library Outdoor Art Competition. Students and faculty members from each of the universities traveled to Winterset early in the spring semester to visit the site, speak with library staff and residents of the community, and learn about local history beyond the bridges of Madison County.

“In my class we go through all the steps of design thinking from ideation to prototyping, taking a concept from an idea in your head to getting it on paper and developing that through multiple iterations,” Lueth said. “This project allowed our students to connect research to concept formation, translate ideas into design and use feedback from presentations and critiques to refine those designs for a real client.”

“In most digital communications classes, students read a textbook and execute tasks. This was an opportunity to have a real project embedded in the class that specifically revolved around outreach,” Forehand said. “Students learned skills (3D modeling, animation, Photoshop) the first half of the semester, then used them in a simulated office environment to produce materials for the competition.”

Eight interdisciplinary design majors enrolled in both courses worked in two teams of four people to develop two different projects for the competition. In Lueth’s class, the teams researched the history of American public libraries — the Winterset Public Library in particular — and the history of Winterset to create projects that would “reveal and celebrate” the community’s rich heritage.

“For a small town like Winterset, they have so much history and they are very proud of their history,” said junior William Okpi, originally from Umuahia, Abia, Nigeria, now living in Marshalltown.

“When we asked people what was important, they mentioned connections to George Washington Carver and John Wayne, the Red Delicious apple and the Underground Railroad. We wanted to incorporate that history in our project and tie everything together so people can interact with the artwork and learn about Winterset.”

The teams also sought a way to highlight their connection with ISU and the state of Iowa through their designs. “We decided to use materials that would be found locally, such as native wood from the university’s TreeCYcle program,” which reuses wood from campus trees felled by storms or removed for other reasons, Okpi said.

The rest of Lueth’s class worked on a separate project for another organization and the remaining students in Forehand’s class — a range of majors including advertising, aerospace engineering and industrial design, among others — helped the two design teams produce videos, presentation boards, and digital and physical models for their competition submissions. View video

Among their key criteria, the jurors — Robin Paul, co-owner of Madhaus Gallery in Winterset; Jordan Weber, curator of Fluxx Collective in Des Moines; and Richard Saxton, associate professor of art and art history at the University of Colorado Boulder and director of M12 Studio in Byers, Colo. — evaluated the four university entries on how well they connected to the specific context of Winterset and whether they presented a compelling argument for libraries, specifically the Winterset Public Library.

“The top-ranked proposal stands out through artistic merit and shows the strongest potential to have a lasting contribution to the Winterset library and surrounding public spaces in the larger Winterset community,” said Paul at a July 2 reception where the winner was announced.

“The seating design, in the form of an open book, evokes a love of knowledge, which is translated and disseminated through reading and interacting with the games and information on the center stem leading up to a curved shade canopy,” said senior Christine Insigne, Pella. “It offers shelter from the sun and a space for both kids and adults to gather, play and learn more about the history of the library and the community.”

Members of the winning design team include Okpi; Insigne; Rachel Boose, Urbandale; and Shelby Silvers, Carlisle. All are entering their final year in the interdisciplinary design program.

Additional students from Forehand’s Digital Design Communications class who contributed to the project include:

“It was a really fun experience being in a competition, working in groups on a real scenario and learning team work and communication,” Insigne said. “I would like to see the project through to the end and be a part of the final build.”

The winning proposal will receive a $15,000 commission for construction and installation. Forehand, Lueth and Kimberly Zarecor, director of the interdisciplinary design program, plan to apply for additional grant funding to help implement the students’ vision for the project and support coursework in the College of Design that will keep students involved through the final design and fabrication phases, Zarecor said. The team anticipates working with the ISU TreeCYcle program and local contractors to fabricate the “open book nooks.”

“We’re very excited about moving forward with the project,” the library’s Trask said. “We still need to determine the logistics and find out what permits and prep work may be necessary now that we’re going from a theoretical design to an actual built project. We look forward to working with the Iowa State faculty and students to develop the final installation.” 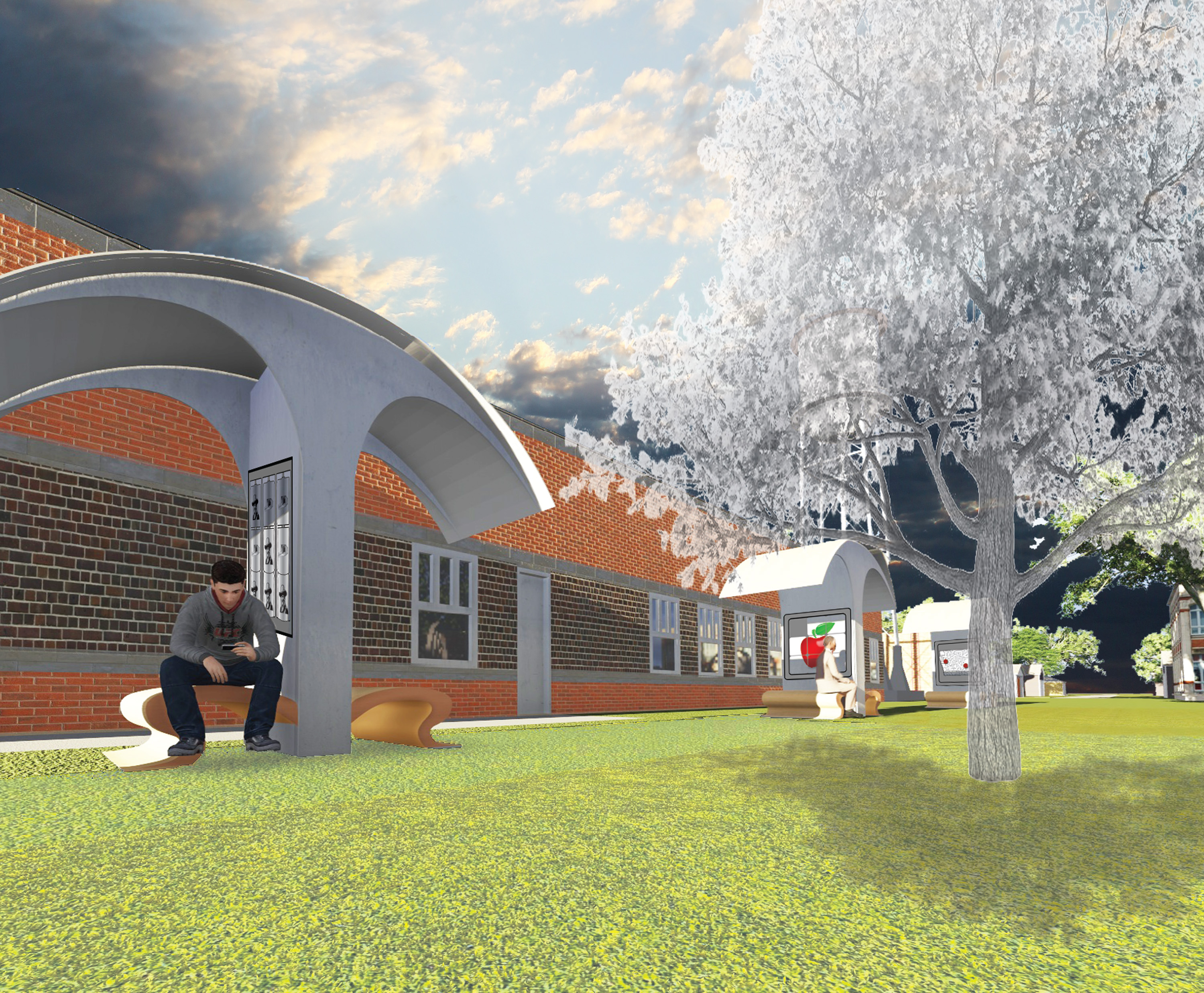