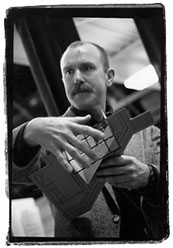 Fred Malven, Associate Professor and former Program Coordinator, joined the College of Design in 1981. He taught previously at the University of Connecticut, Western Kentucky University and the University of Missouri. His professional practice has focused on product design, including numerous tools for the fire and rescue services and industrial design assistance for Iowa industries. Fred regularly teaches design detailing and entry-level studio courses. He also teaches various upper division design studios focusing on office and institutional environments. His courses emphasize human factors in design and the practical application of theory and systematic methods to everyday design problems. His approach encourages the use of three-dimensional modeling for design exploration, refinement and presentation. Fred is a local volunteer fire officer, an Adjunct Instructor for the National Fire Academy and a technical consultant on building fire safety to the Federal Emergency Management Agency and the lighting industry. This activity has supported his research interest in the health, safety and welfare implications of design decisions. He is best known for publications, technical presentations and continuing education programs dealing with building fire safety.

“Fire-Safe Interior Design."  Interior spaces and contents often have a decisive influence on building fire ignition, spread, and control, as well as human consequences. How can interior design educators, students and practitioners best prepare to respond to this challenge? This ongoing project identifies and distills key fire-safe design principles of fire spread and fire protection systems into simple, concise graphic/narrative summaries or “patterns,” modeled on the work of Christopher Alexander, Edward Allen, and others. Incremental developments were presented at:

“Furnishings as Agents of Mechanical Injury." Every year, thousands of individuals experience fatal or seriously debilitating injuries related to interior furnishings. What is the nature and extent of this phenomenon and how might those involved in the practice of interior design help control its occurrence?  Based on content analysis of information in the U.S. Consumer Product Safety Commission’s National Electronic Injury Surveillance System (NEISS) database, a conceptual model of furnishings-related injuries was developed.  High frequency and [especially] high severity scenarios were summarized in simplified symbolic and narrative terms.  The result is a simple schematic model-- "Principles of Safe Furniture Design"-- similar in form to the National Fire Protection Association’s “Fire Safety Concepts Tree.”

“Low-Visibility Navigation of Unfamiliar Spatial Environments.” In the U.S., disorientation in complex building interiors is a major cause of serious firefighter injury and death. Does current pedestrian “wayfinding/wayshowing” theory offer potential strategies for controlling this problem? Working in conjunction with Associate Professor Paul Bruski of ISU's Department of Graphic Design, this field project studied how: 1) interior fire crews mentally track their locations and movement through unfamiliar spaces, 2) exterior rescue crews plot the progress and locations of interior crews for whom they are responsible, and 3) exterior rescue crews define their routes when attempting to find lost interior firefighters.  The present and potential role of “mental mapping” is a subject of particular interest. Results were presented in two venues:

“Building Facilitation of Emergency Wayfinding.” Most developed countries have developed comprehensive formal mechanisms for marking primary egress routes in buildings and other high-density settings.  However, in addition to these formal directional cues, many normally occurring building features (floor patterns, spatial geometry, lighting, the continuity of features in general—formal and informal) are also perceived by users to signify priority routes.  Initiated with funding from the Lighting Research Institute (US), this on-going project has sought to identify, evaluate and refine such features for use as parallel, congruent adjuncts to formal EXIT marking of primary circulation routes, especially emergency egress routes.  An early paper introduced the concept of "expressive validity" as a significant prerequisite to what was described as emergency "way-knowing":

Expanding on the above, the directional potential of architectural form and volume, as informal emergency wayfinding cues, were examined, using a methodology that also compared the merits of full-scale field experimentation and digital simulation.

“In Search of a More Purposeful Conceptualization of ‘Aesthetics.’” Outside of the design community, the notion of aesthetics is widely perceived to be superfluous, devoid of real value. And, even designers themselves have long wrestled with “aesthetics,” sometimes celebrating, later denouncing, its purposeful professional relevancy.  This on-going project has examined various conceptions of “design” with an eye to defining and defending “aesthetics” as a purposeful dimension.  Its defense is founded on two theoretical constructs.  First, aesthetics is described in terms of the ancient Greek notion of the “aisthetike,” that is, being “of the senses” or about sensation and perception.  Aesthetic qualities are invested in the [largely positive] experiences of individuals rather than the durable, universal, material “beauty” of objects and spaces.  Secondly, design, itself, is defined in terms of five functional dimensions, represented by the acronym HOPPS: H) health, safety and welfare functionality, O) operational functionality [a synonym for what might previously have been referred to exclusively as “function,” P) psycho-behavioral functionality, P) physical/physiological functionality and S) setting or contextually-specific functionality.  Within this frame of reference, aesthetic qualities are viewed as one means of achieving functionality in the five HOPPS dimensions—rather than being ends in and of themselves:

“Showing the Invisible: Exploring and Communicating the Rich Potential of Non-Visual Design Concepts.”  Vision being the dominant sensory mode, it is not surprising that design has come to be considered a principally visual phenomenon.  However, design’s preoccupation with the visual has undoubtedly often been at the expense of additional promising concepts, founded on other human sensory modes and less clearly understood.  What steps might help designers be more aware of non-visual dimensions of their work?  What tools are needed to enhance their understanding and action on these issues?  This on-going project is focused on partially answering these questions.

To date, the project has focused on two related goals: 1) a compilation of methods well suited to the communication of non-visual design issues (with oneself, one’s peers, design consumers, and allied disciplines) and, more specifically, 2) the potential of the graphic narrative idiom as a model for development of more hybridized and specialized design communication.  Beyond the use of images, the communication of non-visual subject-matter is often heavily dependent on abstract, symbolic, schematic, tabular and narrative methods.  Early developments were summarized in an invited presentation: