Established in 2020 to recognize College of Design alumni who received their most recent degree from Iowa State University within the past 10 years and have excelled in their professions early in their careers. Johnny Alcivar is the director of workforce programs at Proteus, Inc., a multi-state nonprofit organization that assists agricultural workers. In this role, he is responsible for the delivery of the National Farmworker Jobs Program — funded by the U.S. Department of Labor Employment and Training Administration — in Indiana, Iowa and Nebraska. The program targets chronic unemployment and underemployment in agriculture by facilitating career and training services for farmworkers who seek to retain employment or gain new opportunities.

Alcivar started his career with the City of Cedar Rapids, where he served as education and outreach coordinator with the Civil Rights Commission and then became a Development Services Division specialist. Prior to joining Proteus, he worked as an assistant city planner with the Des Moines Community Development Department.

Alcivar is passionate about community involvement and representation. In 2019, he was recognized by the Iowa International Center as a Passport to Prosperity Honoree for exemplary leadership and for creating a positive impact on the lives of Iowans. In 2020, he was selected as a Des Moines Business Record “Forty Under 40” honoree.

He currently serves as secretary on the Street Collective of Greater Des Moines board of directors and recently joined the Iowa International Center board of directors. Additionally, he is an appointed member of the Des Moines Plan and Zoning Commission. Alcivar holds American Institute of Certified Planners certification through the American Planning Association. 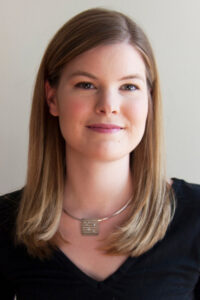 Adrienne Nelson is an associate with Pickard Chilton, a global architecture studio based in New Haven, Connecticut, that designs innovative buildings and transformative environments. Highly experienced in the design of large-scale corporate and commercial projects that serve a diverse and sophisticated client base, Nelson currently serves as the project manager for a 1.25 million-gross-square-foot mass timber corporate campus headquarters in California.

Most recently, she was a designer for T3 RiNo, a heavy timber next-generation office building in Denver, Colorado, as well as the project manager for 325 Main Street, Google’s new headquarters in Cambridge, Massachusetts. Additional projects include 2+U, an office tower and public plaza in downtown Seattle, Washington; 1144 Fifteenth Street, a 40-story high-performance office tower in Denver; the Minnesota Senate Building in St. Paul; and the ATCO Commercial Centre in Calgary, Alberta.

Nelson has served on the board of the Connecticut Chapter of the American Institute of Architects and is the current co-chair of the AIA Connecticut Women in Architecture Committee. She previously served as a mentor and team leader for the New Haven affiliate of the ACE (Architecture, Construction, and Engineering) Mentor Program. She received the 2016 AIA Connecticut Emerging Architect Award.

In 2020, Nelson was accepted into the inaugural class of the national AIA Leadership Academy and recognized among ENR’s National Top 20 Under 40. She is a member of the International Interior Design Association and a LEED Green Associate.